Should Mark Clattenburg Have Sent Luis Suarez Off for Diving?

Liverpool are an excellent team: fun to watch, exciting, hard working. The Liverpool v. Manchester City game was incredibly fun for a neutral like myself. Not only were the stakes high, but the emotions – with the tribute to the Hillsborough disaster – were even higher. Both teams gave it everything they had (in American parlance). There was only one big

END_OF_DOCUMENT_TOKEN_TO_BE_REPLACED

There were two huge red card decisions in this past week’s Champions League first leg ties. Each of the cards had massive impact not only on the matches, but on the overall ties. In both cases, English teams were facing formidable opponents (Barcelona and Bayern Munich, respectively) and found themselves giving up vital away goals after losing a man. So,

END_OF_DOCUMENT_TOKEN_TO_BE_REPLACED

Well… Sort of. But not really. The good news: Manchester City’s Manuel Pellegrini, under threat of sanctions from UEFA, apologized to Swedish referee Jonas Eriksson for – among other things – calling him a Swede. The bad news is that it’s pretty clear that Pellegrini isn’t apologizing at all. He starts out by reiterating that Eriksson’s penalty call (which came

END_OF_DOCUMENT_TOKEN_TO_BE_REPLACED

Well, well… Just when I was readying the torches and pitchforks after Manuel Pellegrini blamed Manchester City’s loss on Sweden, Martin Demichelis comes out with this: I think Demichelis was put in an impossible position, and he’s just not strong enough to cover Lionel Messi. But I do admire him for accepting responsibility and not taking the child’s way out

END_OF_DOCUMENT_TOKEN_TO_BE_REPLACED 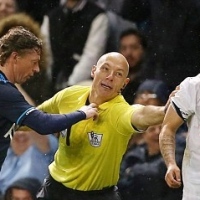