How Stoppage Time is Determined

Ever since Sergio Ramos’ 93rd-minute shot heard ’round the world in the Champions League final, people have been talking about stoppage time. Whether you believe referee Bjorn Kuipers’ decision to add five minutes to the second half was right or wrong, there’s no doubt that it impacted the match.

So, how do referees decide how many minutes of stoppage time to play?

The rules around stoppage time are part of Law 7, The Duration of the Match. Specifically, we’re referring to the section called “Allowance for Time Lost”: 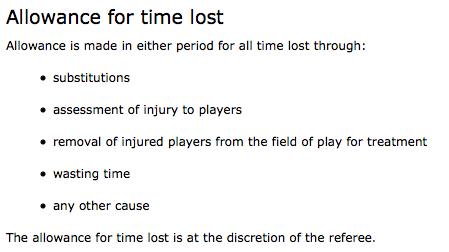 The key piece here is that the decision to award stoppage time is at the discretion of the referee. You hear it all the time:

Only one man knows how much time is really left.

Most referees rely on their fourth official and/or the assistants to help them keep track of the time (particularly in the case of injuries), but it’s the center ref’s call as to how much time is awarded. Taking any advice from his assistants into account, he gives that information to the fourth official who shows it on the board.

The clock never stops. The referee and his assistants simply keep track of how much time elapses, and then add it all up at the end.

There are a lot of natural stoppages of play, and not all of those are counted. Normally, restarts are considered a part of the game. It’s up to the referee to decide when a player has crossed the line from normal play to time wasting.

Some of the other situations laid out in Law 7 are pretty straight forward. Injuries or the assessment of injuries are counted from the time the stoppage occurs until play resumes, either because the player is fit or because he’s taken off the pitch.

Substitutions are pretty easy, too. Whether a guy takes his sweet time coming off the pitch or bolts off like he was shot from a cannon, the referee is within his right to count it.

Things like flares on the pitch or women streaking across in their bikinis could add time, too.

There’s some talk about the “thirty second rule”; many leagues and referees use this as a general rule of thumb to determine how much time to add at the end of a half. Former Irish referee Dermot Gallagher said:

“From Euro 96 we’ve had this standardisation that we’re going to play 30 seconds per substitution, and for excessive goal celebrations we’re to play another 30 seconds – so it starts to tot up, and this is why we find the three or four minutes we have on average at most games.”

But note that this is only a guideline, and not all referees or leagues use it.

Referees can also add time to added time, if they feel there were stoppages or time wasting during extra time. This has caused some pretty serious issues in English Premier League, leading to concerns about inconsistency.

In fact, this season referee Lee Probert had two situations within one week: one where he extended extra time (allowing a team to score) and one where he stopped at the allotted time, even though a team was about to score. Both situations caused controversy.

Here’s a good Q&A about the subject from the BBC (English Premier League focused, obviously).

The referee can even choose to add no time, though this is rare. (Nicola Rizzoli did it in Serie A this year, when Roma were down 3-0 and short two men in a contentious match against Juventus.)

At the end of the day, the referee decides what is a stoppage and what is not, and he decides how much time to add. You waste time at your own peril.

How do you think referees should determine stoppage time? Let us know below.