Honestly, none of the referees blew me away today with their awesomeness. And a couple of them did some really, really strange things…

Ravshan Irmatov (Uzbekistan), USA v Germany
In a game shadowed with rumors of match fixing, I really expected the referee to come out swinging and call the game very tight.

Irmatov did the opposite. I saw him let three major fouls – for both teams- including a potential yellow, go in the first 25 minutes.

He then ran right into Jermaine Jones right in the box at about 27 in. I mean, ran right into him. Jones wasn’t looking, true, but he had his eye on the ball. Irmatov needs to ensure he doesn’t get in the way of the players.

Which I shouldn’t really have to say.

He should have given Alejandro Bedoya a yellow card in the 58th minute and didn’t. He gave the foul, though. There was also a foul on DaMarcus Beasley, to which Irmatov played a strange advantage, and then didn’t bring it back for a foul. He did finally take his card out on that sequence, but only when Kyle Beckerman took down Bastian Schweinsteiger.

I ultimately think he didn’t have much effect on the outcome, but I certainly have seen stronger performances.

Nawaf Shukralla (Bahrain), Portugal v. Ghana
There was a lot of pushing and shoving in the early stages – handbags at ten paces, really – and Shukralla dealt with it pretty effectively without losing his cool. His foul detection was not overly impressive, though.

He was quick to get guys off the pitch when they needed treatment, unlike some matches we’ve seen. He was kind but firm about it.

Shukralla also had positioning problems, at one point intercepting a cross (yes, you read that right) from Ghana just outside the box and giving the ball back to Portugal.

He literally he took it in the chest, turned his shoulder and directed it right to the Portuguese player with his body. There was no defending player anywhere else near the cross, and he remained where he was even though the Ghanaian was far from him and looking right at him.

It looks like once he’d played the ball to Portugal, Shukralla was stuck, though even Portugal didn’t seem to know what to do with the ball he gifted them. Shukralla’s standing right in the path of the shot was terrible positioning and not something you see from top class referees, and the Ghanaians were rightly furious with him. (I’ve seen both Howard Webb and Nicola Rizzoli get hit several times, but always by a ball hit close to them with little reaction time, not halfway across the pitch.)

The Ghanaians had a penalty shout in the box late in the first half, and Shukralla rightly didn’t call it. But he did it by pointing in the general direction of the spot, causing confusion in the stands.

One pretty hilarious thing: Portugal had a throw in right before halftime, and they were taking their sweet time about it. Shukralla got bored with them, checked his watch and blew the whistle before they could finally take the throw in. Serves them right, I say.

He made a good non-call in the second half when Cristiano Ronaldo went for the ball and clattered into the goalkeeper. No real foul there, in my opinion. He made another good non-call when Ronaldo went down in the box at the slightest touch (and even that was hard to see) from the Ghanaian defender.

Jordan Ayew probably should have been sent off in the second half when he swung his arms at the Portugal defender who was practically pulling off his shorts. Don’t blame him for losing it, but he was still lucky to get away with it.

So, Shukralla had some issues today. But his fitness was pretty good, though.

Cuneyt Cakir (Turkey), Algeria v. Russia
I have to say I do like Cakir’s style. He’s very good with players. When he ushered an Algerian player with a gash in his head off the pitch for treatment, he was firm but compassionate at the same time

Unfortunately, the Russians scored while Algeria was down to ten men with that injury. But there is no way Cakir can be held responsible for that; when there is blood he has to get the player off the pitch.

There was a non-call in the 30th minute which probably should have been an Algerian penalty, when the Russian defender practically pulled off the Algerian’s shorts in the box (what was up with that today?). Neither Cakir nor his assistant referee were in a position to see it, so it went unpunished.

Cakir had to really brandish the cards in the second half, as the game threatened to boil over, with a ton of pushing and shoving. At one point, he was reduced to pointing to the “RESPECT” patch on his arm over and over.

One very serious issue in this game: There was a green laser from the stands being used against the Russians in the Algerian end of the pitch. It was used to distract Aleksandr Kerzakhov, and it was right in Igor Akinfeev’s face when the goalkeeper let the second goal in (though it’s doubtful that Akinfeev wouldn’t have flapped at the shot, laser or no). Lasers should not be allowed in games, and when Russia complained to Cakir, he and his fourth official should have acted with security.

I was a little surprised just three minutes in when Moussa Dembele was rolling on the ground grasping his head after a clash of heads with a Korean player.

Williams motioned for him to get to his feet and pointed to his watch. Dembele (not known as much of a diver) was clearly hit and with head injuries as big a story as they are – not to mention that it was only minute three – you’d have thought Williams would have shown a little more patience.

He waved off two early penalty calls from Korea and I think he was right on both.

The straight red shown to Steven Defour at 44 minutes was a no brainer. Studs showing, he missed the ball and got the whole player. We’ve seen two other players sent off in this tournament (Claudio Marchisio of Italy and Antonio Valencia of Ecuador) for nearly the same offense, so the referees are very consistent and Williams had little choice.

I must say, Defour handled it like a gentleman, shaking hands with his opponents and apologizing before walking off without a complaint. Would love to see more of that behavior…

Jan Vertonghen may have been ever so slightly offside on Belgium’s goal, but the flag stayed down. (As a Tottenham fan, I must say, I was quite happy for Big Jan.)

Williams did fairly well, especially compared to his compatriots. His fitness was excellent and he didn’t get in anyone’s way. 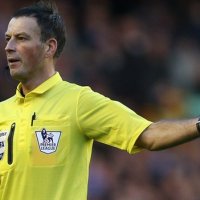 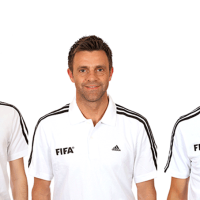 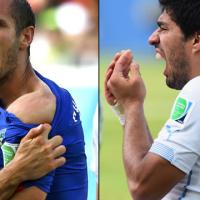 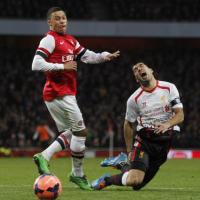