The standard of refereeing has been a talking point in this World Cup since before the tournament even started. Hardly a surprise; referee bashing should be a sport in and of itself.

I’ve watched almost every match, so I decided to go back through my notes and pull out some of my favorite refereeing performances of the Cup so far… 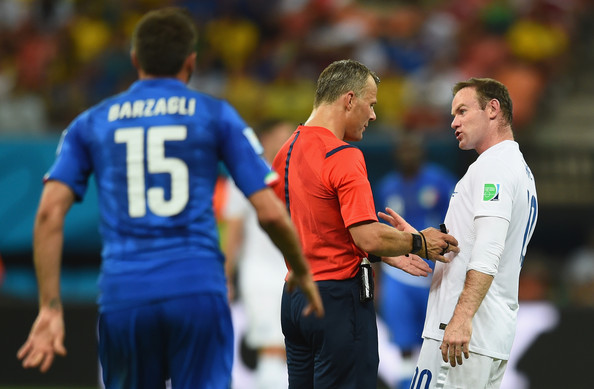 He really is establishing himself as the best there is. His positioning is perfect, and his demeanor with the players is calm and relaxed and yet still very much authoritative. He kept the game flowing.

This was the first time we’ve seen that easy manner in which he maintains control of a game without getting in the way, but it wasn’t the last, and most likely we’ll see him in the latter stages of the tournament.

Webb might have struggled a bit in league play this year, but he’s been outstanding in the Cup. Coming into Brazil, I wouldn’t have thought him a candidate for the final, but he’s becoming harder to ignore the more he referees.

The non-calls that he was so maligned for in EPL are serving him well here, allowing games to flow. His ability to control a match through sheer personality is important as well, with referees being directed to give yellows only when necessary.

In this match, he disallowed a goal for Brazil on a Hulk handball that looked iffy at first but replays showed to be absolutely correct. It was a brave call that showed confidence in not only his team, but himself.

He made very few mistakes in this match, and handled it with such aplomb that I forgot about him for long stretches. His presence was such that he was treated with near universal respect by the players.

Basically, this game was as exciting it was in part because of Sandro Ricci.

And his fitness! In the 91st minute, Ghana was sprinting down the pitch on a counter attack, and Ricci was keeping up pace for pace with the speedy Ghana players, something not many referees could do. And that was after running for a full 90 minutes. 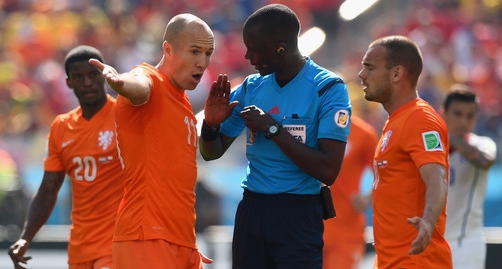 First time I’ve seen Gassama (above), but I was fairly impressed with him. He was pretty good at foul detection, not missing much. These two teams are prone to, shall we say, over-exaggerating. He didn’t fall for much of that.

He did allow several very heavy challenges, but it never really got out of control. He kind of let Netherlands play their very physical game without it descending into violence.

His manner with the players was good. He always had a slightly indulgent smile on his face, but was firm at the same time.

He was also quite fit, keeping up with play very well. I saw him running backwards at times as fast as some of the players were moving forward.

Geiger had a good tournament, with the exception of one unfortunate game. This match was by far his biggest assignment, and his best performance.

He was very firm with both teams, keeping the game moving while still allowing the players to play at an exciting tempo.

In the second half, he was fairly invisible, which is what you want from your referee. His fitness is also impressive and he kept up with play admirably.